I had a pretty hectic month. Getting through some personal stuff at the beginning plus loads of fun stuff like becoming the mom of a young adult! My daughter turned 18 which is completely bananas. IDK where nearly 2 decades went! And I had some great weekends with friends...and apparently I sewed a.ton.

I'm never quite sure how it happens. And especially this month as I had several days (including 2 whole weekends!) where I never graced the sewing room. But whatevs. My fall list is long, I've culled a ton of stuff from my closet, and I feel like I'm finally defining my style. Still need to work on weekend/casual wear, but I'm slipping some of that in as I go.

This month I sewed:

Favorite: Until you see it...you'll have to take my word...Burda 9/2016 is awesome and fantastic and makes me want to frolic. I want to put it on everyday and dance around. I may review that before the other gazillion unblogged things.

Okay, here's a photo I posted on Instagram (speaking of...) -- It makes my heart sing! 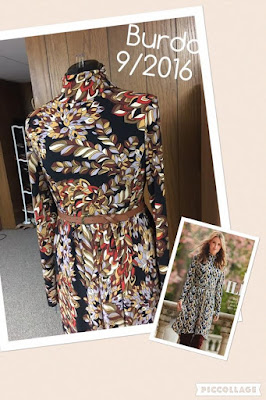 FAIL: The M7358 top is at least CUTE on. So even though I side-eye it daily, I won't call it the fail of the month. I'll have to give it to the Burda raglan sweatshirt. I had something in mind but don't think it worked out as planned. I hacked the pattern (kinda sorta not really) and my proportions are off. Plus the fabric is super stiff and I should have 'jumped ship' when I realized that and used something with a bit more drape for what I was going for.

Accomplishments: I have been 1) wanting to sew the KS jacket since forever. According to PR, I bought that pattern around April 2014. and 2) wanting a casual suit since forever. And now I have it! I love the two together even if the shirt and top I made to go with don't work (TOO blue). Reviews to come - promise!

My daughter has her first concert performance next week and needs concert attire. I tried to enforce my will but no dice. ;-) She described what she wanted and even though I know she doesn't see it, I'm going to use her prom dress pattern to make the gown. With a full back (vs. a 'v'), no lace or illusion or tulle or slitted skirt...and with elbow length sleeves...it's perfect! The bodice will be in black stretch velvet and the skirt I'm not 100% sure yet. I am thinking I could use the leftover suiting fabric I made the New Look 6481 jacket with but I don't want it too stiff. But it should have some body and be relatively wrinkle free.

I'm entering the outerwear contest on Pattern Review. I am making the Clare coat by Closet Case Files. I actually snatched up this pattern as soon as it was released, spurred on by Michelle's review (of Happily Caffeinated). I am using black wool with a gold-tone brass zipper. I don't need a Minnesota winter coat, just one warm enough for the in-between weather. Which to me is around 30 degrees F to zero. Once it drops below zero, out comes the parka.

High on the wishlist for the month is view B of Vogue 9210 in an olive/moss colored ponte with gold zippered pockets And with the same fabric, the top in Vogue 1465 (a DK or DKNY pattern so it's no longer on their site)

And, McCall's 7430. I was so immediately drawn to this one when it was released. I have a gray ponte for it and after Erica posted a version for her daughter, it jumped right back to the top of the pile.

There are no finished measurements on the site, hopefully they're on the pattern tissue. But with all those seam lines, getting a good fit should be easier.

I really wanted to make this sleeveless at first but think I'll add sleeves. A simple, solid colored knit dress will come in handy and can be worn alone or layered. I don't want full-length sleeves though so either D with B's sleeves or B with A/D's collar. However you want to look at it! :)

If I could sneak in one last project, it would be Butterick 6388

I may be being a bit over-ambitious here. But that's okay :) I'll do what I can do. Her dress needs to be done by 10/7 so that's first. I'm giving myself 2 weeks for the Clare which I think is doable. I plan to start it on 10/10. That way, any mishaps I'll have time to work through and if I get done on time or early, I can move on to one of my other projects. I'm actually almost certain I can get DDs dress and the Vogue top and leggings done by the 10th but we'll see!

Lastly, I think I'm over social media. Well the big ones. I've deactivated my Facebook and don't miss it. Instagram has frustrated me with their algorithm based feed...It's an annoying concept and really it's just another way to market/advertise. But on IG it really makes NO SENSE. They reorder photos and then you get stuff out of context. So you're commenting on something but don't realize another photo or two have been posted since and your comment is now irrelevant.

They claim not to hide anything, just re-order it. But I've gone on, seen just a handful of new posts (I follow about 400 accounts), close out, go back hours later and still see pretty much the same posts. And then I navigate directly to someone's account and see several posts that I did not see in my timeline. It's aggravating.

I have a Twitter account but don't use it. I feel all I ever see are celebrity and "celebrity" posts, even though I don't follow them. And Snapchat is pretty much exclusive to family.

So I'm reading more and sewing more (har, har) and starting to get out a little more and attend events/functions/etc. And I'm going to the gym every other day! (I did not go when I was sick).

I think '4th quarter' makes me restless. I'm always excited to flip the calendar and move on to a new year :)

Posted by SewCraftyChemist at 2:22:00 PM

Email ThisBlogThis!Share to TwitterShare to FacebookShare to Pinterest
Labels: about me, Burda Style Magazine, sewing plans, Wrap up